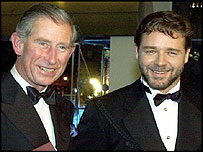 harles at the royal charity première of his movie Master and Commander.

Crowe arrived with pregnant wife Danielle Spencer to the screening in aid of the Cinema and Television Benevolent Fund.

The naval epic, adapted from a novel by Patrick O'Brian, is set against the backdrop of the Napoleonic wars.

Crowe, who plays British naval Captain Jack Aubrey, introduced the stars of the film to Prince Charles, himself a Vice Admiral in the Royal Navy, ahead of the screening.

The prince was presented with a souvenir brochure by Max Pirkis, a 13-year-old schoolboy who stars as Lord Blakeney in the film.

Master and Commander: The Far Side of the World is primarily based on one of 20 seafaring stories by popular British author Patrick O'Brian, who died in 2000.

It sees Russell Crowe plays a naval hero, leading a crew of 197 men into battle against the French.

Organisers of the première gave it a nautical theme, swapping the traditional red carpet for a sea blue one, and erecting flame-firing cannons and water projection.

The typical British winter weather also helped with the water theme, but the rain did not stop hundreds turning out to cheer Crowe and the cast.

James D'Arcy, who plays Lt Tom Pullings, commented the weather was "reminiscent" of what the cast endured during filming.

"We were soaked, we were absolutely soaked for about 11 days. They had massive dump tanks, which were like big barrels on a slide. They opened themselves up and you saw the water about half a second before it came.

"I have to say that the costumes were not exactly water resistant so once you were wet at about 9 o'clock in the morning, that was it. You just stayed wet for the rest of the day."

Much of the film was shot in a six-and-a-half acre tank in Mexico where director James Cameron sunk the Titanic.

The film is already attracting Oscar interest, with Crowe and Bettany winning US critics' plaudits, and cinematographer Russell Boyd praised for the lush visuals.

It is released in London on 21 November and nationwide on 28 November.